Is this your business?

MYANMAR 🇲🇲 Eat the World LA review: Nadi lives quietly around the corner from Main on N. 4th Street, and for appearing so small it holds a surprising number of people, put on full display as it filled up during the course of this meal. Most of the interior is painted a bold and bright red, except for one wall which is completely covered by a painted photo of Bagan's many temples. Nadi has a pretty simple two-sided menu of Burmese cuisine, but an interesting section labeled "special" focuses on renditions of kyah-oh, a particularly popular rice noodle soup in the country. You can get pork or chicken kyay oh as soup, or served without the broth in a "sichet" version. This pork kyay oh ($9.99) is loaded with ground pork and intestine, and also comes with tofu, quail egg, fish cake, and mustard greens in a pork bone broth.

Hole in the wall that serves delicious Myanmar food. Although the restaurant can get a little stuffy during the summer, the food is worth the slight discomfort. The portions were fair for the price! I ordered the slow-cooked pork tomato curry, which wasn't decadent to the taste. The tea leaf salad is also a good pick!

One of my pet peeves about being a New Yorker is that you'll have to acknowledge limitations to the best city on earth cliche. I wouldn't have to fling myself onto the SoCal freeways for the daily commute (thanks to the flawed but functional NYC subway, if I have to drive on a daily basis I would go Mad Max on everyone), and I won't have to go too far for groceries. That being said, it's nice to live in a clean looking city without discernable seasons, where you can shut out the unfavorable minorities with an expensive car residing in a different zipcode. Oh yeah, and Burmese food. For some reason someone forgot to populate NYC with Burmese restaurants. The closest that we have for one is in Montreal...Canada (and it was only okay/so-so). So me and the missus were in the Monterey Park/Alhambra/San Gabriel area looking for Japanese model kits, and as such, we were in the area until around 7p. We were trying to figure out what we want for supper. Since Monterey park is "Little Taipei", Alhambra is "Little Hong Kong", and San Gabriel is where Chinese businessmen stash away their mistresses (kidding, kidding), the missus has her eyes out for Taiwanese. I was okay with the concept, but I kind of want something a bit different, like, say, Ugyhur (Western Chinese/Islamic) or even Ethiopian back in LA, since we have decent Taiwanese back home in NY (Liang's used to be in Flushing and Forest Hills before it inexplicably folded). Hell, I would even gun for late night street meats in Koreatown. Hmm, that's odd. One of the restaurant search results for Taiwanese...showed up as Burmese. Hmm. Intriguing. And it is not too far from the San Bernardino freeway. When it came to Burmese food, my initial reference point was the late and lamented Mingala restaurant in midtown east (Manhattan), where I usually pick up the Burmese tofu salad or the Yangon night market duck noodles. There's also this Burmese restaurant in the Rotunda Carlos de Maia in Macau that was decent for Mohinga (curry fish noodles). So, how did Nadi compare to this? Pretty good, actually. The tophu hoke (Burmese tofu salad) was pretty on-point with tamarind and fish sauce notes, cilantro and a little bit of spice. The chicken noodle salad was decent as well, soft noodles contrasting with the crunch of crispy fried shan tofu strips, a similar dressing as the hoke, and comes with a bowl of comforting fish broth dusted with white pepper. The missus ordered the sweet ribs curry, which while tasty came buried in a layer of oil. It was served with a mustard green soup with rice and pickles. Along with the meal we ordered fresh lime juice and some iced Jasmine tea, both came in shockingly decent sizes (which calls to mind the fact that the restaurant does not have a public restroom). Service was decent, and the dining room was clean. So, was it a culinary highlight of my California road-trip? Yeah, I would say so. It's definitely on a list of places that I would stop in on when I visit LA again.

NO PUBLIC RESTROOMS but the food and staff are amazing. A lot of vegan options too. They serve "Pure Myanmar(Burmese)" food.

The food is great and the staff are so nice! Love walking over here to eat. The space is a bit small but we have generally been able to find a table without much of a wait. 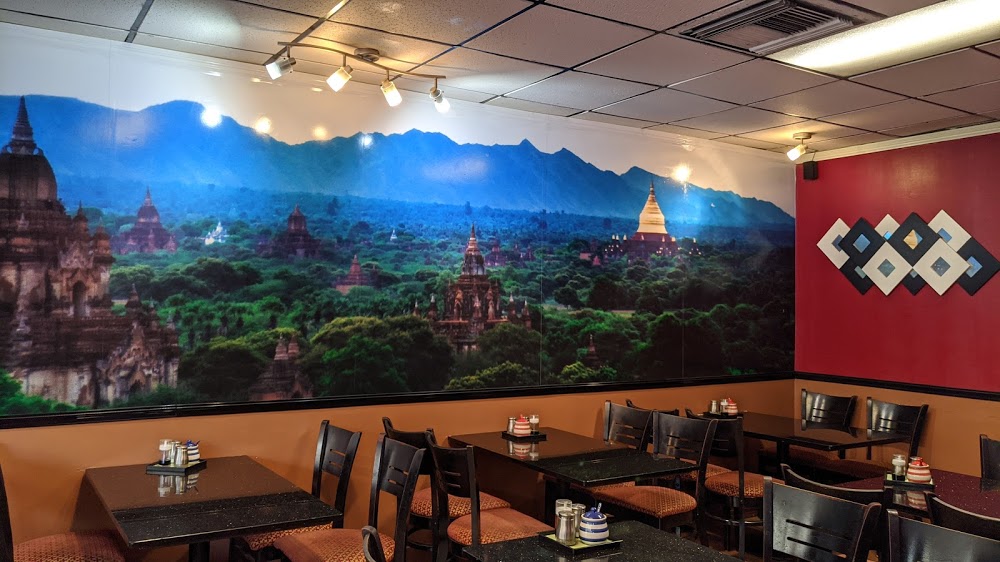 Please Login or Register an Account to Claim Listing

For more information on our listings, advertising, coupons, and mailers, please contact us today!